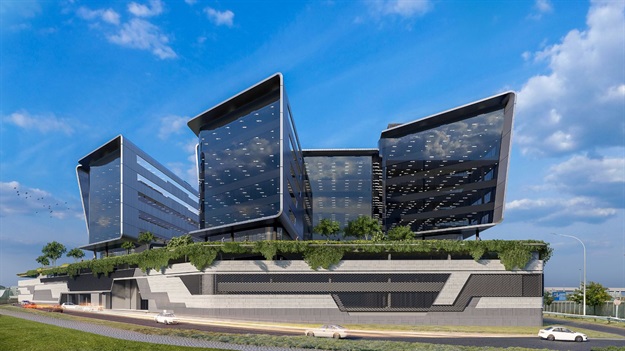 OR Tambo International Airport has unveiled the first phase of a multi-billion-rand development plan for its Western Precinct which will feature new offices, retail space, hotel and conference facilities and additional transit-related services.

At a sod-turning ceremony for its Western Precinct development, an 8.5-hectare site, general manager of the airport Bongiwe Pityi-Vokwana detailed the airport’s plans to unlock the development potential of 180,000m2 of bulk for a mixed-use development to be located on the northern precinct of the airport. Construction begins this month with an anticipated completion date for the first phase of the end of 2020.

Pityi-Vokwana was joined at the ceremony by members of the Western Precinct Consortium, which won the bid for the first phase. This phase will see construction of three six-storey office buildings, above podium with a floor area of 33,000m2.

Said Pityi-Vokwana: “As the busiest airport in Africa and the international gateway to South Africa, it is imperative that OR Tambo International Airport remains an international landmark with world-class infrastructure and a large variety of services for all users and markets. The Western Precinct development forms part of a strategy to expand our offering and to drive new sources of growth for the entire region.”

In addition to this development, OR Tambo International’s Airports Company long-term Infrastructure Master Plan features midfield cargo and midfield passenger terminals, each requiring several billion rands in further investment. These developments will accommodate growing passenger demand and expand the midfield cargo facilities at the airport to accommodate up to two million tonnes of air cargo annually.

“At the same time, airport users will start to see upgrades to the existing terminal buildings. So, we are entering a very exciting period in the life of our airport which supports about 38,000 jobs in and around the precinct,” said Pityi-Vokwana.

The mixed-use development will consist of a variety of buildings which are framed in such a way as to form a boulevard at the international departures level, where a variety of retail commercial and ancillary buildings each open onto a ‘street’ environment serviced by restaurants, corner cafes and bars.

The structure will house all the vertical and horizontal circulation functionality in a clear and legible way anchored by the Gautrain station at its core and aims to provide a unique architectural language to Africa’s largest airport.

The first phase buildings will provide for:

Corporate head office for Airports Company South Africa and the South African Civil Aviation Authority, and
Common-use facilities such as a fitness centre, canteen and creche.

The development will improve the connectivity from the Gautrain station and to existing hotels and facilities via pedestrian friendly connections to the international terminal building.

The members of the Western Precinct Consortium are HERI Propco (developer), mmqsmace Consultancy, and TiBER Construction (building contractor). The consortium’s ownership profile is 62% black-owned. It has committed that a minimum 30% of the total contract value will be sub-contracted to Exempt Micro Enterprises (EMEs) and Qualifying Small Enterprises (QSEs).

“We will also be closely partnering with the consortium to ensure that their enterprise development and skills development plans are achieved and that local residents are prioritised during the recruitment of labour,” Pityi-Vokwana added.

Consortium leader Mandla Mlangeni said the group was delighted to win the competitive bid. He said that during construction of the first phase, an estimated 1100 people will be employed on site at the peak of the project.

“We have already put in considerable effort to recruiting from the regions around the airport and will continue to do so. In addition, the consortium will remain focused on fulfilling our bid undertakings to use black-owned subcontractors and suppliers,” Mlangeni said.

Pityi-Vokwana said that ultimately, the seven phases of the Western Precinct development will stretch from the site of the old Shade 2 carports in the north to up to where the Southern Sun Hotel is located.

She said that the planned revamp of the airport’s façade will present an entirely new profile in keeping with its size and role in the regional and national economies. The iconic airport development precinct will serve as a catalyst in transforming the airport hub into an aerocity.