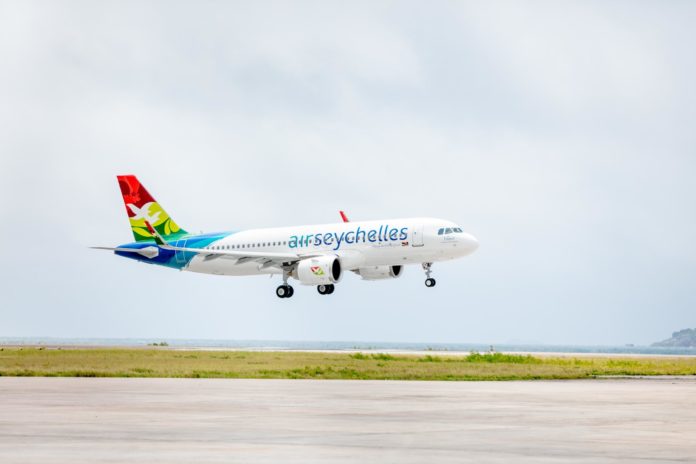 Air Seychelles has announced that the airline is moving forward with its corporate social responsibility programme to reduce carbon emissions, reinforcing its commitment towards sustainability.

Apart from investing in a series of electric equipment to reduce fuel dependency in its ground operations, the arrival of the new Airbus A320neo aircraft at the start of August, has also played a significant role in the environmental initiatives of the airline.

Having completed 111 flights during its first month of operation across the airline’s network between 6 August and 6 September 2019, the new engine option aircraft has on average generated 20% fuel savings per flight.

The improvement in fuel consumption influenced by the lightweight composite structure of the aircraft has also been enabled by the large fuel-saving wingtip known as sharklets.

Powered by the new generation LEAP-1A engine from CFM International, the Airbus A320neo produces approximately 50 percent reduced noise footprint and nitrogen oxides (N0x) compared to the fleet of Airbus A320ceo (current engine option) aircraft. The maximum noise produced by the new aircraft is similar to that of a heavy truck loader passing at a distance of five meters in the city traffic.

Remco Althuis, Chief Executive Officer of Air Seychelles said: “The aviation industry worldwide is under considerable pressure over the issue of carbon emissions and its impact on climate change.

“As fuel and emissions are two key factors that impacts the global environment, at Air Seychelles we remain committed to contributing towards the sustainable development, by conducting business in an economically and responsible manner.

“To ensure that the airline develops sustainably, we will continue to explore ways to implement ecological measures across the business, to improve and safeguard the environment where the airline operates.”