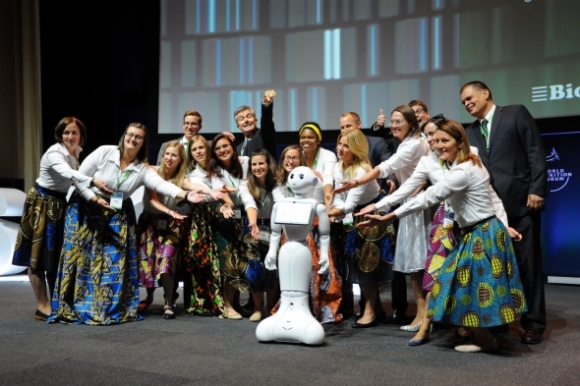 In a first for conferencing at the Cape Town International Convention Centre, the centre hosted “Miss Pepper”, a humanoid robot capable of detecting human emotions during the BIOMIN World Nutrition Forum 2018.

Developed by SoftBank Robotics, “Miss Pepper”, who is capable of interacting with humans and more excitingly can adapt her interaction according to a human’s emotions, was unveiled during the three-day international conference.

According to SoftBank Robotics, the Pepper robot is the “first humanoid robot capable of recognising the principal human emotions and adapting his behaviour to the mood of his interlocutor”.

“She (‘Miss Pepper’) is able to perceive emotions, and what is a conference like the BIOMIN World Nutrition Forum without emotions? The digital experts of BIOMIN additionally trained her to be the little star on the stage – to welcome the audience, break the tensions, but in first line to demonstrate that the future of using humanoid robots has started now. “By using ‘Miss Pepper’ we have the intention to create the image overflow from technological developments of other industries to biotechnology and animal nutrition, an overflow that develops already towards a merger, when we see the modern technologies like Farm 4.0, one of the big topics of this conference,” said Mr Kneissl.

“Miss Pepper” is capable of recognising faces, speech, and can hear; she can also identify when someone is experiencing joy, sadness, is surprised and filled with anger. Over and above recognising these emotions, “Miss Pepper” can also detect tone of voice, smiles, and frowns.

“At the CTICC, we are committed to facilitating the introduction of emerging technologies such as ‘Miss Pepper’ to delegates and visitors. The developments we are seeing in artificial intelligence speak directly to the Fourth Industrial Revolution and the impact this is having, and will continue to have, on both our professional and personal lives.”

“It is extremely important for the CTICC to host forward-thinking conferences such as the BIOMIN World Nutrition Forum 2018. The conference not only considered opportunities and challenges in the ‘protein economy’ but also the role AI can play in scientific advancements,” said Julie-May Ellingson, Chief Executive Officer at the CTICC.

The Forum brought together industry professionals who discussed a number of topics including factors influencing the “protein economy”, gut health, antibiotic resistance, alternatives to using antibiotics and technologies that could advance the field of nutrition.