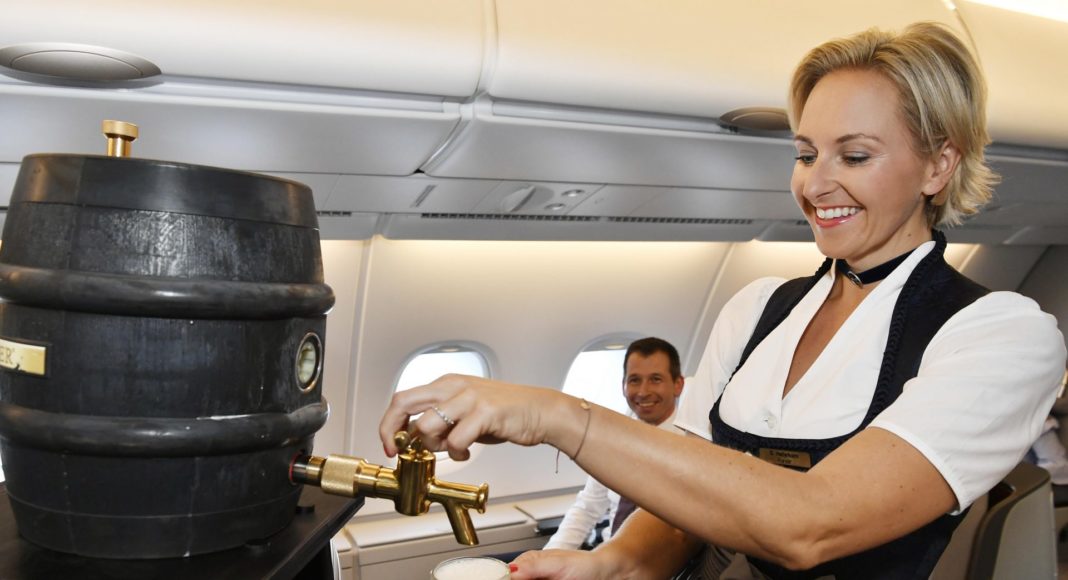 “Beer on tap” on board Lufthansa’s traditional costume flights

Lufthansa’s cabin crew will soon take off in traditional Bavarian costumes – just in time for Munich’s Oktoberfest. As the yearly tradition, Lufthansa’s cabin crew are wearing traditional Bavarian costumes on selected flights from Munich instead of their uniforms. Additionally, Lufthansa is bringing beer kegs on board to serve fresh draft beer to customers as this year’s special treat on these flights.

For the first time ever, the crew has participated in developing an exclusive Oktoberfest menu for Business Class customers, that pairs perfectly with the fresh draft beer. This year, the first Lufthansa traditional costume flight will be taking off from the Bavarian capital on September 19, heading for New York (Newark).

The attire of Lufthansa’s long-haul crew was designed and custom-tailored by the Munich traditional costume specialist Angermaier. The Oktoberfest Dirndl worn by the female flight attendants is dark blue with a silver-gray apron and their male colleagues will be wearing short Lederhosen, with a dark blue waistcoat made from the same material as the Dirndl. This is the third year running that Angermaier has dressed the cabin crews to celebrate the largest folklore festival in the world. As in previous years, Lufthansa passengers can also enjoy seeing the traditional costumes on flights departing from Munich to selected European destinations. From October 5 to 7, one of the crews on the Lufthansa CityLine will swap their uniforms for traditional costumes. Their destinations this year are Berlin, Cologne/Bonn, Luxembourg, Pisa, Genoa, Amsterdam, Rzeszow, Timisoara, and Cagliari.

The tradition also continues for Lufthansa employees working in Passenger Services at Terminal 2, as they will also continue welcoming passengers in Bavarian costumes during the Oktoberfest. Instead of the Lufthansa uniform, female staff may wear a Dirndl and their male colleagues can opt for Lederhosen. The service employees in Lufthansa’s First Class Lounges will be wearing traditional costumes in black and gold.

Passengers enjoying freshly-tapped beer on Lufthansa flights go as far back as the 1960s. Back then, the “Lufthansa Senator Service” served draft beer and now, the beer kegs are coming back on board again this year. An “airworthy” keg was selected specifically for the Lufthansa traditional costume flights. In this special keg, the carbon dioxide pressure is regulated by a valve. This prevents the pressure from becoming too great on board so that tapping the keg can be done even at an altitude of 10,000 meters. And to go with the fresh beer, passengers in Business Class will also be served a special Oktoberfest menu. For the first time, these have been created by Lufthansa’s flight attendants in cooperation with the culinary experts at LSG Sky Chefs. The ideas and experiences of the crew on previous traditional costume flights were taken into account while developing the menu. The selection this year includes ox tartare with truffle, followed by char with Riesling sauce and Bavarian cream with pistachio pesto. In September and October, Lufthansa passengers in Business Class can enjoy the Oktoberfest menu on all intercontinental flights.

Oktoberfest in the Lufthansa Lounge

Munich’s Lufthansa Lounges are also ready for the Oktoberfest. As was the case last year, more than 4,000 kg of “Leberkäse”, more than 38,000 pretzels, and about 750 kg of white sausage will be consumed in the twelve lounges located in Terminal 2 and in the satellite building. The Oktoberfest menu in the restaurants of Lufthansa’s First Class Lounges, which will be decorated accordingly, will begin with an Oktoberfest soup followed by duck served in a rustic style. For dessert, there will be apricot and plum dumplings with vanilla espuma. The Senator and Business Lounges will offer their guests an “Andechser” goulash soup or mushrooms in cream with dumplings. And, of course, all the lounges will be serving Oktoberfest draft beer.

Passengers who land at Munich’s Terminal 2 during the first weekend of the Oktoberfest will receive a special free Oktoberfest box. It contains everything you need for the festivities – a ribbon for a beer mug, vitamin drink, some salty pretzels, and fruit gummies in the shape of a beer mug.

Jeanette Briedenhann
Jeanette Phillips joined the team in 2016. She developed a passion and love for all things-travel related in her role as travel journalist, a position she held for over seven years. A brief exodus into the corporate marketing sphere proved that there is no better industry than the travel industry. Research and writing are two of Jeanette’s greatest passions, but she is always open to new challenges and different ways of doing things.
Previous articleAirlink introduces business class on Richards Bay route
Next articleGiltedge Africa relaunch travel app with new features

South Africa transitioned to lockdown level one in September 2020, sparking a revival of the corporate travel industry. In an effort to...
Read more
Corporate Travel