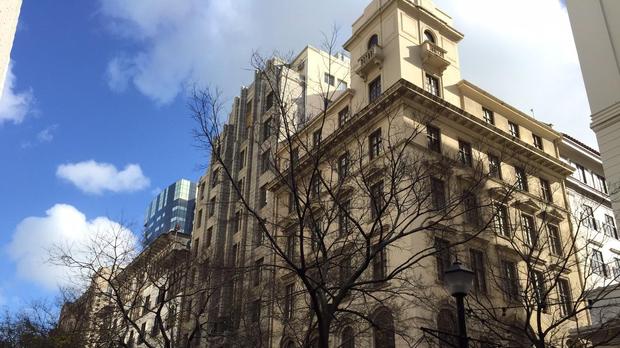 Gorgeous George on St George’s Mall is first Cape Town member of world-renowned Design Hotels, based in the heart of Cape Town and will open in March.

The hotel is created out of two restored heritage buildings and will be an inner-city gathering place for locals and the well-travelled.

Originally built by the United Building Society, the hotel’s entrance is Art Deco, while the conjoined building boasts traits of the New Edwardian style of the 1940s. The uniting design embraces each building’s architectural features, while at the same time allowing for different moods depending on the viewer’s perspective, for instance, one façade has window frames of steel while another has the original oak surrounds. Interesting concrete and steel structures are incorporated throughout the hotel.

The biggest challenge in marrying the two buildings was their different heights, and the solution gave rise to the tower that hosts the rooftop pool,first floor and allowed for the bar and restaurant to be on the same level as the pool. The first-floor eventing space that can accommodate up to 150 people seated banquet style.

International award-winning interior designer Tristan du Plessis, who was responsible for the hotel’s interior, said they wanted to create a modern, timeless hotel using South African designers as part of the design DNA. Each of the 32 rooms expresses South African contemporary style, interlaced with a vintage edge.

Du Plessis has used carefully chosen South African art pieces and furniture that capture the chic look and feel of downtown Cape Town. Lighting and furniture were sourced from David Krynauw, Gregor Jenkin, Studio 19, Douglas&Co, and Dokter and Misses, with a feature crocodile swing chair from Porky Hefer, while murals from artist David Brits are featured throughout. The foyer is home to an intricate mural created by Cape Town artist Lucie De Moyencourt. The Delft inspired masterpiece is made of 1 800 hand painted tiles depicting a map of Cape Town.

Guy Bennett, who cut his culinary teeth in the kitchens of top South African chefs Reuben Riffel, Michael Deg and Bertus Basson, and most recently helmed Grand Provence in Franschhoek, will be the Executive Chef. With an extensive knowledge and passion for food, Guy will use his experience to create fresh and inspirational dishes to thrill the palates of both local foodies and international travellers. “We want people to come for lunch and stay for dinner,” says Neilen Tolmay, General Manager of Gorgeous George.

Gorgeous cocktails made by renowned mixologist Jody Rahme will be served at the rooftop bar overlooking the cityscape. Jody began his mixology journey in Johannesburg at Sin + Tax bar before joining Gorgeous George.