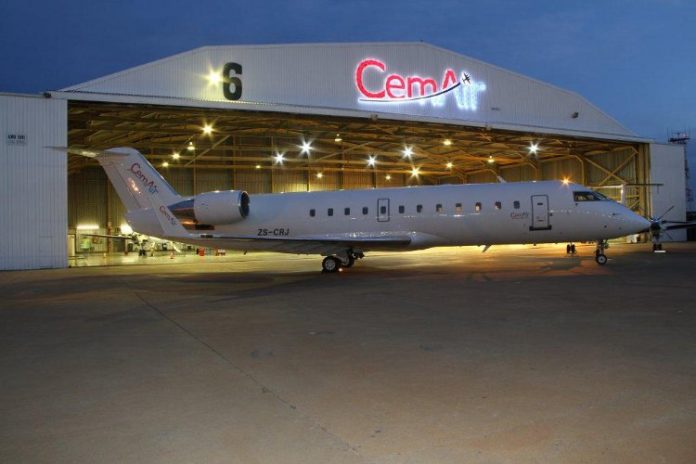 The South African Civil Aviation Authority (SACAA) has temporarily withdrawn the Certificate of Airworthiness (CoA) privileges for 12 aircraft being operated by CemAir.

This withdrawal of the Certificate of Airworthiness privileges is precautionary and temporary; meaning that it will automatically expire after 24 hours at 05:00 AM on Saturday, 03 February 2018.

The decision to withdraw CoA privileges follows the discovery during an audit by SACAA inspectors that some of the aircraft that were serviced at CemAir’s Aircraft Maintenance Organisation (AMO) were released back to service or cleared as airworthy by unqualified personnel. This is in contravention of Part 43 and Part 121 of the South African Civil Aviation Regulations.

This practice poses an imminent danger for crew members, passengers, and the public at large, and has a direct impact on aviation safety, since the airworthiness status of the aircraft concerned cannot be confirmed and/or is questionable.

The operator is required to submit proof of compliance before the expiry of the prescribed 24 hours or to make a representation and state reasons as to why the relevant aircraft should not be grounded in line with the prescripts outlined in the Civil Aviation Act, 2009 (Act No. 13 of 2009).

Thus far, the SACAA has received full cooperation from CemAir and will continue to provide any assistance possible to the operator, and within the Regulator’s mandate, in order to ensure that the matter is resolved as soon as possible.

As much as the SACAA is fully aware of the effect and disruptions of the suspension on passengers, it is equally important to note that decisions such as these are not taken lightly and are, in fact, in the interests of ensuring that the operator’s safety systems are beyond reproach, and can offer an acceptable level of safety. When safety systems are beyond reproach, the passengers and everyone concerned can get some form of assurance that the operator’s aircraft can take-off and land at the intended destination relatively safely and incidentfree.

The SACAA will always remain committed to meeting its obligations of keeping the skies safe. Unsafe operations have the potential of undermining South Africa’s admirable zero percent (0%) accident fatality record in the airline and scheduled operations sector, which has been standing for many years.