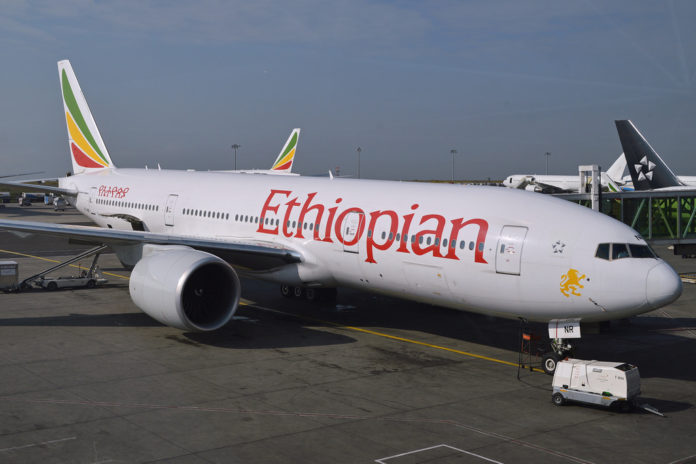 Following the news in December last year that Ethiopian Airlines is to increase its Johannesburg service to a third daily flight, the airline has now confirmed that it will take effect on 1 April, 2018.

Regional Manager Southern Africa, Abel Alemu said flights were under huge demand, not only to Addis Ababa, but also to a wider selection of over 100 routes worldwide.

Ethiopian Airlines started flying to Johannesburg in 1994. It now operates two flights a day. The airline added Cape Town to its growing network in June 2015. The route is currently being served with a daily direct flight with ultra-modern Boing 787 Dreamliner and B777-300.

Ethiopian Airlines is, without doubt, a major success story in today’s world of aviation as it is recognised as the fastest growing airline in Africa. Its South Africa offices located in Johannesburg and Cape Town are no different from its headquarters in Addis Ababa, as they strive to implement their 15-year strategic plan called Vision 2025.

A Boeing 737-800 will be dedicated to the new flight on the 1st April 2018 with 138 seats in economy and 15 seats in business class. Already added to the booking system, reservations can be made with immediate effect.

“Currently only a 5-hour flight between Johannesburg and Addis Ababa, with only a 2-hour transit time, this new flight addition is going to make it even quicker for passengers wanting to travel to destinations such as Mumbai, New Delhi, Tel Aviv, Nairobi and Entebbe’, said Alemu.

The Ethiopian fleet includes ultra-modern and environmentally friendly aircraft such as Airbus A350, Boeing 787, Boeing 777-300ER, Boeing 777-200LR, Boeing 777-200 Freighter, Bombardier Q-400 double cabin with an average fleet age of five years. In fact, Ethiopian is the first airline in Africa to own and operate these aircraft.