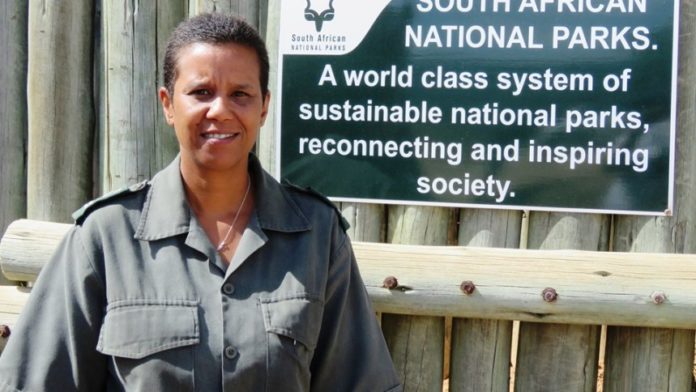 A former conservation student at Addo Elephant National Park (AENP) has returned to the Eastern Cape park as its Conservation Manager. Cathy Dreyer started her career in Addo just outside Port Elizabeth nearly 20 years ago and has over the years affectionately become known as the “Rhino Whisperer”.

Cathy studied Nature Conservation and completed her degree at the Cape Peninsula University of Technology, after which she did her experiential training at AENP. Here she worked closely with South African National Parks (SANParks) Veterinary Wildlife Service Unit which is based in Kimberley. After completing her experiential training year she joined the game capture team on a permanent basis and worked with them for 12 years, capturing and relocating a wide variety of species throughout Southern Africa and Africa.

In 2012 she left SANParks and took up the position of Conservation Manager at the Great Fish River Nature Reserve, managed by the Eastern Cape Parks and Tourism Agency. Five years later she returned to SANParks as the Black Rhino Surveillance and Monitoring Co-ordinator for Kruger National Park.

She now heads up conservation in Addo Elephant National Park, home to the “Big 7” – elephant, rhino, buffalo, lion, leopard and the southern right whale and great white shark in the marine section of the park. Addo is the third-largest national park in the country and is comprised of a 182 000ha terrestrial component and 116 000ha Marine Protected Area. It’s been a busy two weeks in the Park for Cathy, who spent her first week participating in her first aerial census as well as being involved in an elephant contraception exercise.

Cathy says the highlight of her career was being awarded the Tusk Award for Conservation in Africa in London in 2016. She was the first South African recipient of the award and the first female to have won it. The Tusk Conservation Award is given to an individual who has been judged to be an emerging leader in conservation in Africa and in recognition of their outstanding contribution and considerable successes in their chosen field. The award was presented to Cathy by Sir David Attenborough. She says meeting him was one of the most memorable experiences of her life.

About her role as Addo’s first female Conservation Manager, Cathy says, “I am looking forward to supporting the Park’s terrestrial and marine conservation efforts and feel incredibly privileged to be a part of such a passionate, dedicated and committed team of rangers.”