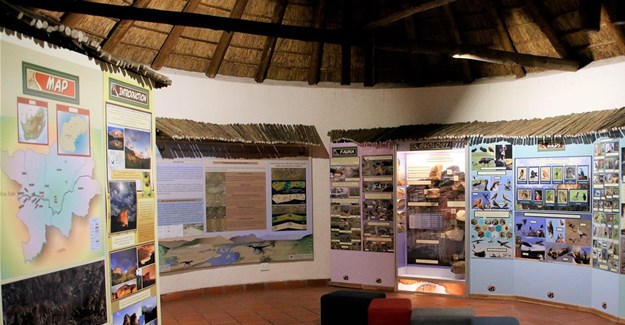 An interactive and informative interpretation centre that encapsulates the diversity of the area and its broad offerings has been added to the Glen Reenen reception of the Golden Gate Highlands National Park, as part of SANParks drive to elevate the park’s market profile amongst both domestic and international visitors.

The interpretation centre takes visitors through a journey of the discovery of dinosaur eggs in our country and the beautiful natural heritage of fauna and flora that is found in the park. The display includes an introduction, birds, geology, fauna, vegetation, palaeontology, history, activities, facilities, climate and rock art.

The exhibition was put together by SANParks Honorary Rangers. It has taken more than two years to put together enough information and material for the team to finalise some artwork and get a glimpse of what the final product will look like. The project started around October 2017 and the team has successfully completed the final stages of installing the artwork, palaeontology specimens and geological specimens.

“We are confident that the centre will provide the most ideal platform to educate visitors (especially young learners) about dinosaurs and many other aspects within the study of archaeology.” said Property Mokoena, managing executive – parks division at South African National Parks

“The SANParks and Honorary Rangers relationship has been in existence for decades as both our mandates coincide with one another to promote the conservation and preservation of our national heritage. This is why we could not turn a blind eye to the Golden Gate Highlands National Park management when we received a request for assistance with building an interpretation centre within the park. The discovery of dinosaur eggs is a marvel in South Africa, and what better place than in a National Park?” says Des Bothma, a member of the SANParks Honorary Rangers.