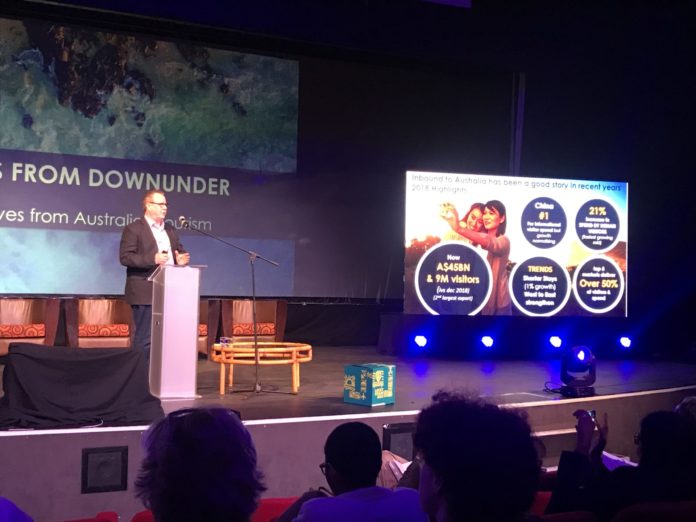 Finding ways to make it easier to visit Australia has driven a collective approach from all levels of government and the private sector, contributing to the country’s success as a tourism destination.

“Everybody is working on the same page with the same purpose. For any tourism marketing campaign, we have a core theme and variations thereof for each region. We hunt in packs, all singing the same message, and this has largely been the recipe for our success in our current tourism strategy,” explained Shelley.

The equivalent to SATSA in Australia, ATEC is a private-sector tourism body which rebranded to include the term ‘export’ and has since benefited from increased government attention as a result. “Tourism is the second-largest export industry in Australia.”

Shelley described how Australia’s tourism strategy was government-led and industry-supported. “We started with a collaborative discussion where every level of government was brought into the plan. The States’ and Regions’ plans were a mirror of the national plan. We were aligned in our vision and that has been our success.”

As a result, the destination achieved A$45bn in tourism revenue and nine million international visitors in 2018, from just $70bn in 2009.

The Tourism 2020 Strategy was based on several success factors, including a whole-of-government approach, a collaboration between the industry and government, improved funding for bigger, better campaigns, infrastructure that drives demand, reduced taxes and changes, and effective training.

Despite the huge growth seen out of markets like China, Shelley highlighted a number of challenges for Australia as it enters the planning stages of its next strategy. To cut through the ‘sea of sameness’ in tourism marketing, Australia is thinking out the box with such innovative and collaborative campaigns as the Dundee Campaign, which leverages the caché of Crocodile Dundee and Paul Hogan in the US market.

“We have generated 14,500 news articles from the campaign with an Advertising Value Equivalent of A$85m and it has certainly been successful in raising awareness about the destination,” said Shelley.

This is all aimed at countering the consumer challenges of limited knowledge about Australia’s offering outside of iconic experiences and the low urgency nature of the destination. “Australia perceived as a once-in-a-lifetime destination which can be put off for another day” – a similar challenge to what South Africa faces.

The key to Australia’s success, concluded Shelley, was that Australia’s tourism sector were all rowing in the same boat towards a goal. “A collaborative industry and an engaged government leads to a fruitful partnership and progress,” he said.