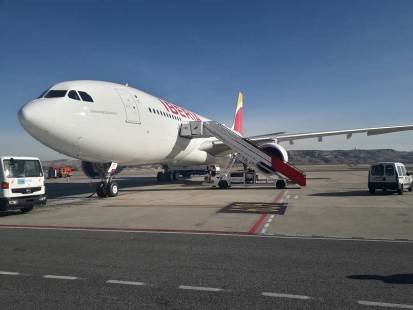 In an event celebrated at O.R. Tambo International Airport, Iberia has presented today its newest A330-200 called “Johannesburgo” to pay tribute to the South African city.

Nearly 70 guests, including the Spanish Ambassador to South Africa, representatives of O.R. Tambo International Airport, the South African department of Tourism, travel agencies, corporate customers and media, attended the event and were able to visit the aircraft.

Celia Muñoz, Iberia’s head of Sales in EMEA and Asia, said: “Johannesburg is a long-standing destination linked to Iberia’s history and now one of our aircraft carries proudly its name wherever it flies to with the aim to promote the city as a tourist and business destination”.

“As Airport Management, we are excited to celebrate together with Iberia Airlines its maiden flight to this airport, in its newest aircraft which is the A330-200, aptly named ‘Johannesburgo’,” commented Ms Bongiwe Pityi, General Manager, O.R. Tambo International Airport.

“As the largest and busiest airport in Africa, we are very proud that we are one of twelve (12) hand-picked routes globally which will be operated and serviced by this new aircraft. Statistics show that over the past 12 months, from May 2017 to May 2018, Iberia Airlines has seen a 7.69% year-on-year increase in air traffic movements as well as an 8% year-on-year increase in departing passengers.

As part of our ongoing relationship, our ambition is to partner with Iberia Airlines so they continue to achieve consistent and sustainable growth which will stimulate our regional economy leading to job creation.”

The aircraft “Johannesburgo”, with the registration no. EC-MUD, is the 12th A330-200 received by the Spanish airline and is currently flying to cities in Latin America (Havana, Medellin, Rio de Janeiro or Santo Domingo), the United States (Los Angeles and San Francisco), as well as to Johannesburg and Asia (Shanghai and Tokyo).

The “Johannesburgo” has 19 seats in Business and 269 in Economy class. On board, Iberia customers can enjoy the new long-haul cabins. Seats that unfold into 2m-long beds, all with direct access to the aisle, and a 15.4” touch screen are the main features of the Business class, while Economy seats are 46 cm wide and have individual 9” screens, as well as an adjustable headrest.

Passengers in both Business and Economy cabins can enjoy an extensive entertainment programme with some 70 new films every month, in different languages, 111 television series and documentaries, nearly 800 audio options, and 18 video games. There is a special entertainment channel for children. Wi-Fi, offered in both classes, uses the KU band, allowing a greater download speed.

Iberia resumed its operations from Johannesburg in August 2016 with three non-stop flights a week to Madrid. Since then, it has offered nearly 169,000 seats and the number of passengers carried has positively developed. Though most passengers fly point to point between Johannesburg and Madrid, Lisbon, Barcelona, Porto, Dusseldorf, London and Cape Town are the main connecting destinations feeding this route.