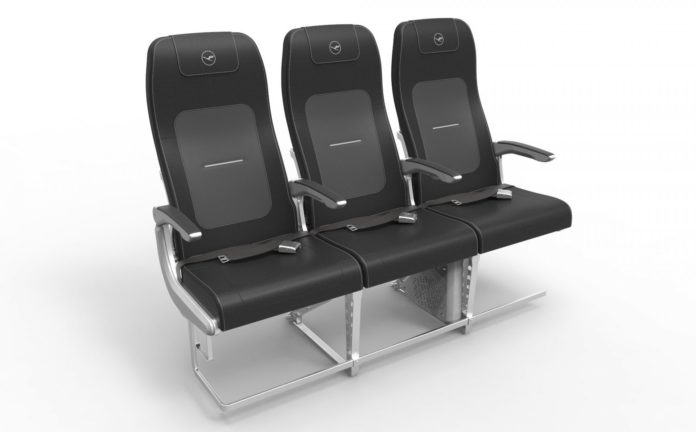 With the start of the planned Airbus A320 Family aircraft deliveries starting in 2019, Lufthansa Group customers will be offered new seats on short- and medium-haul routes.

The new, ergonomic pressure distribution and fully-structured seat upholstery will allow customers to have an ever more comfortable feeling on board.The newly, innovated literature pocket has been horizontally designed, leaving a slimmer backrest, which allows guests to enjoy more personal freedom.

In addition, travel becomes more comfortable not only during the flight, but also while the aircraft is taxiing, during take-off and landing: Previously, guests were seated at a 12 degree inclination during the three phases mentioned above, whereas now they will be able to rest comfortably with their backrest at 20 degrees during the whole flight. Business Class guests can also set the backrest to 26 degrees during cruising altitude.

Paul Estoppey, Head of Product Cabin Lufthansa Group Hub Airlines says: “A lot of customer feedback went into designing the seat and we are pleased to have already received a lot of positive feedback on the implemented features over the course of the project.”

For the first time, the network airlines Lufthansa, SWISS and Austrian Airlines are jointly introducing standardized seats for a harmonised, comfortable travel experience. In addition to the advantages for customers, the focus of development was also aimed at reducing weight and maintenance costs. After several preliminary talks, customer tests and quality audits, the Italian manufacturer Geven clearly won the contract for the production of the seats.