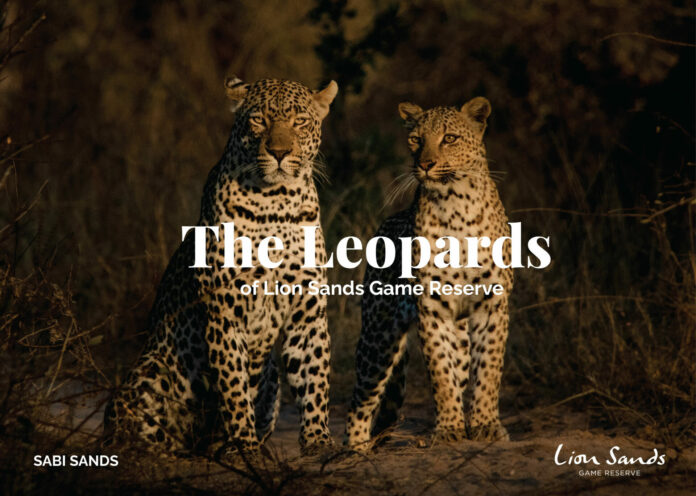 MORE Family Collection’s Lion Sands Reserve is the only private wildlife sanctuary that has a foothold in both the Sabi Sand Game Reserve and the Kruger National Park. Straddling the Sabie River and with wildlife roaming freely between the two sides, guests are treated to unforgettable sightings of a diverse number of non-migratory species — among the most majestic is the leopard.

The Greater Kruger National Park is renowned for having one of the world’s highest leopard densities, while Sabi Sand lays claim to the most relaxed leopard population. This has allowed MORE Family Collection field guides to follow the lineage of generations of leopard and watch their lives play out.

The MORE Family’s lifelong love affair with the leopard and a deep desire to share this with their guests has resulted in The Leopards of Lion Sands Game Reserve guide, available on all Lion Sands safari vehicles going forward.

“It was our wish to enhance the unforgettable moments our guests spend in the company of the leopards who inspired this labour of love,” explains MORE Family Collection CEO Robert More. “Tracing an extraordinary lineage and the days, months and years that have shaped their stories, this guide brings guests closer to the dynasties of leopard who roam the Lion Sands Game Reserve.”

Combining spectacular wildlife photography with the backstories of individual leopard in both the Kruger and Sabi Sand, the territories they frequent and fascinating facts, this guide reveals the often-hidden world of these largely solitary big cats.

From the unique way in which leopards are identified by ‘whisker spot patterns’, through to being assigned a name once they become territorial, a picture builds around each individual. And every name has a story, whether linked to a leopard’s physical appearance, their personality or an event in their lives.

Among them, a female called Porcupine, named after a road in the Kruger National Park, the male Ingwe Donga, unmistakable due to his orange colouring and green eyes, not to mention a huge scar from his nose to his ear, and the gentle Hanyile who is so tolerant with family members, he once relinquished a kill to a female and her two cubs. Close-up photographs and descriptions help guests identify the individuals they may see.