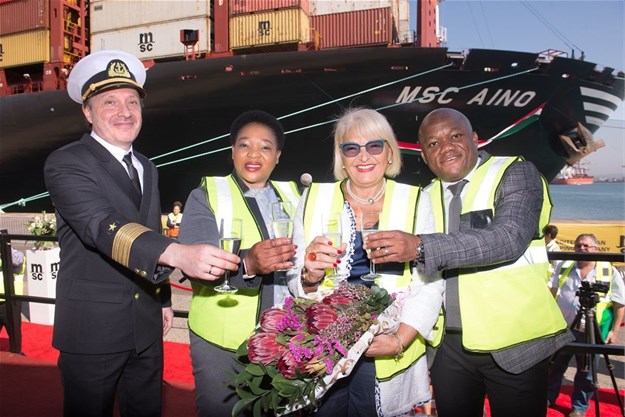 MSC South Africa has announced the formation of its new training facility, the Shosholoza Ocean Academy, which will begin to operate from November 2019. The announcement was made during the naming ceremony for the new MSC Aino (TEUS* 12108) Container Vessel in Durban…

The MSC Aino has been named after Aino, a daughter of a MSC manager, in the tradition of naming ships after female family members of people working at MSC.

Speaking at the ceremony attended by the Premier of KwaZulu-Natal, Sihle Zikalala and other dignitaries, Captain Salvatore Sarno, Chairman of MSC SA, said that this was the first time a container vessel has been named in the Port of Durban. He said that MSC had specifically chosen to name the ship here as it demonstrates the company’s commitment to this country by creating jobs and growing the economy.

Referencing President Cyril Ramaphosa’s State of the Nation address earlier this year, in which he stated that government would create “no less than two million new jobs for the youth in the next decade”. Sarno said: “Our intention is to actively demonstrate our confidence in the country and by extension the economy, as we have put plans in place to train and create jobs for 5,000 people on both our cruise and container vessels.

“We have formed the Shosholoza Ocean Academy, as a non-profit company in response to the urgent need for young people to be employed in South Africa,” said Sarno. “Last year October, our managing director Rosario Sarno met with the Department of Trade and Industry to formulate its development and we have the full backing of government going forward.”

Sarno explained that KwaZulu Cruise Terminal (KCT) was recently awarded the contract for the development of the new Passenger Terminal. KCT is a partnership between MSC cruises and African Armada, a black empowerment company headquartered in KwaZulu-Natal. The Shosholoza Ocean Academy will be house on one level of this building.

“It has always been a dream of ours at MSC, to have a passenger terminal in Durban which affords our guests a sense of dignity as they disembark and embark on voyages with our liners,” said Sarno. “Utilising the building as both a commercial space and training environment will have great synergies going forward, as trainees will have real-time and practical experiences of working in this sector, developing their understanding and confidence prior to graduating.”

Training will be provided by expert and qualified personnel in many forms of hospitality that are relevant to the cruise sector, as well as technicians, welders, boilermakers, maintenance and repair personnel for the container and cargo sector. Students would be required to do theoretical training and also serve on either a cruise or container vessel on any of MSC’s vessels globally to gain hands-on experience and expertise whilst studying towards their chosen area of interest. Details of recruitment and enrolment will be communicated at a later stage.

On reaffirming the Port of Durban and the City of Durban’s unique capability to support the shipping industry and create opportunities for economic growth, Sarno said: “Durban recently showed the country and the world that we are able to be more actively involved in the global shipping sector, when we did repair work on the MSC Ines, the 300m container ship that was damaged in the storm in 2017. The entire rudder was damaged and had to be replaced. Instead of towing it to Singapore technicians and experts from Durban were able to do the job. Now that is a great indication of how we can grow an economy around repairs and building in the sector as well.”