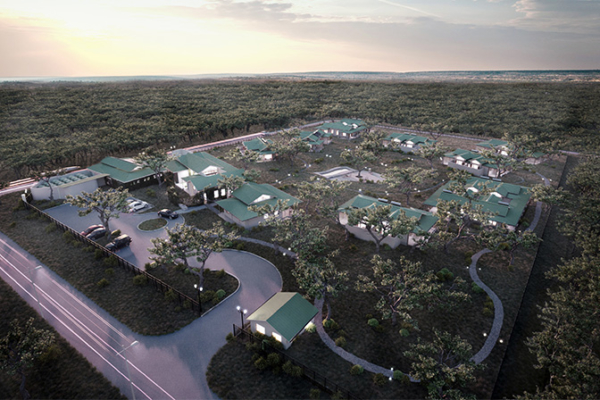 Scheduled to open in early 2019, Mbano Manor will be the latest luxury property to open in Victoria Falls.

Once open, Mbano Manor will feature 19 suites and will offer a unique and nature-based experience to its visitors at an estimated rate of U$950 per person per night sharing, on a full board basis. The interior of the hotel is described at classic chic, featuring countryside architecture, inclusive of modern amenities.

The hotel was carefully designed to ensure minimal disruption of the original forest, the design is classic-chic, crafted around bungalow architecture, abundant spaces and generous verandas from which to enjoy the rich natural setting. Interiors boast old-world comfort combined with modern amenities, supported by touches of nature and stone. Ancient teak trees dominate the large garden setting, with stone paths linking public areas and the luxury suites.

A cluster of large trees also dominate the reception, lounge and restaurant areas. Guests are welcomed to Mbano Manor with a spacious, open-plan reception area, where a curio shop invites the temptation to shop for bespoke local artefacts.

“We foresee meeting their needs with the new luxury Mbano Manor Hotel,” says Nyazema. “We aim to cultivate and safeguard the unique, exclusive and bespoke nature of the Mbano Manor Hotel, to become the luxury Victoria Falls destination of choice.”

She says they see a great opportunity to leverage the new-found optimism enjoyed by Zimbabwe following recent positive political and economic developments. “Mbano Manor Hotel is ready to unleash the abundant luxury tourism opportunities on offer in the Victoria Falls and greater Zimbabwe region.”

“At the Mbano site, as we develop the hotel, we delight in daily sightings of wildlife – mostly during evenings – as they stroll past. In under three months of construction, four of the Big Five – lion, elephant, buffalo, leopard – have already paid a visit, curious about the new neighbours,” says Nyazema.