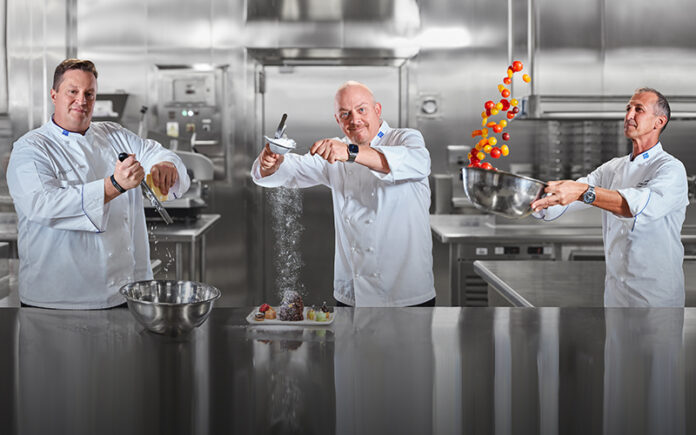 On the heels of a history-making debut in Reykjavik, Iceland, this next “EMBARK” episode showcases the company’s commitment to pushing the boundaries of traditional cruise cuisine by presenting the ultimate face-off among talented NCL chefs. Hosted by Norwegian Prima Cruise Director Simon Akinwolere and NCL’s Senior Director of Culinary Development and Operations Christian Pratsch, viewers will get a front-row-seat to this high-stakes cooking showdown, as each competing chef steps up to the challenge, flexing their culinary skills and sharpening their knives to whip up three creative dishes for judging.  Only one winner will be proclaimed, earning them bragging rights and the honor of having their dish savored by thousands of NCL guests around the world.

“We have a history of delivering some of the best cuisine at sea,” said Harry Sommer, Norwegian Cruise Line president, and chief executive officer. “In fact, we are investing heavily in our food and beverage experience so what better way to get the creative juices flowing than a friendly competition amongst our talented chefs. Sommer continued, ‘The Great Cruise Cookoff’ invites viewers into the kitchen and gives them a seat at the table to witness the behind-the-scenes action. I can’t wait for our guests to see, smell and savor the winning dish!”

In “The Great Cruise Cookoff,” Corporate Executive Chef Michael Koertgen, Director of Culinary Operations Eric Bilodeau, and Corporate Executive Chef Didier Lailheugue, are given 60 minutes to prepare three incredible dishes using three distinct ingredients.  Once the time is up, the chefs will present their plates to be judged and proclaimed the winning chef of the very first Great Cruise Cookoff.

Norwegian Cruise Line has a long-standing history of delivering the highest-level of cuisine at sea by offering innovative dining concepts with each new ship, most recently aboard Norwegian Prima, boasting 18 dining options on board, including the debut of Palomar, a high-end Mediterranean-style restaurant, Nama, a contemporary sushi house, and the brand’s first Indulge Food Hall, featuring 11 eateries. The Company is making a significant food and beverage investment to elevate the guest experience through globally sourced quality products, increased staffing levels to provide even more exceptional service and brand-new main dining room menus which first debuted aboard Norwegian Prima. This next episode of EMBARK with NCL further showcases the Company’s commitment to offering the best cuisine at sea by tapping its chef’s creativity with a friendly competition.

For more information about the Company’s award-winning 18-ship fleet and worldwide itineraries, or to book a cruise, please contact a travel professional or visit www.ncl.com.