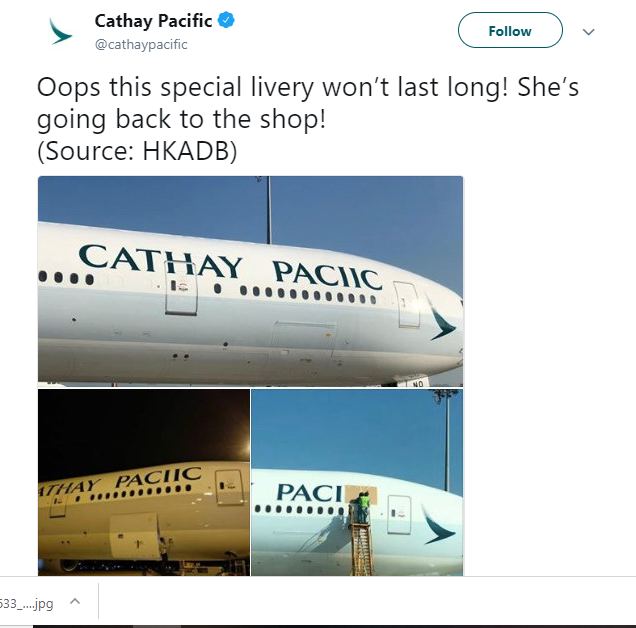 Typos happen, even to the best of us, however, luckily for most of us it goes unnoticed or at least without much fanfare.

This was unfortunately not the case for Cathay Pacific, when the airline grabbed the attention of the World Wide Web, when a spelling error was made with its name on the side of a new aircraft.

Photos were posted on the Internet that appears to show a plane on the ground at Hong Kong International Airport, displaying “CATHAY PACIIC, instead of Cathay Pacific.

However, the airline was quick to jump in and see the funny side and shared the photos on social media, announcing on its Twitter account: “Oops this special livery won’t last long! She’s going back to the shop!”

According to CNN Travel, the photos surfaced via the Hong Kong Aviation Discussion Board Facebook group, but it’s still not clear just how such an epic mix-up could have happened — and some are a little suspicious.

An engineer for Haeco, a Cathay Pacific subsidiary, told the South China Morning Post: “The spacing is too on-point for a mishap. We have stencils. Should be a blank gap in between letters if it was a real mistake I think.”

A spokesperson for Cathay Pacific told CNN Travel: “We did not intend to make it a big fuss in the first place, but photos went viral within the aviation enthusiastic groups, so we just shared the hilarious moment with everyone.”