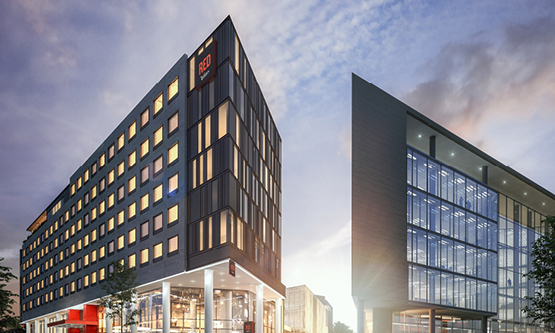 Radisson Hotel Group has announced the signing of its second Radisson RED in South Africa – continuing the brand’s fast-growing African and global expansion. Scheduled to open early 2021, the Radisson RED Johannesburg Rosebank will arrive and shake up the hospitality industry in Africa’s second-largest city. The hotel brings the group’s African portfolio to almost 100 hotels in operation and under development.

The new-build, 222-room hotel will comprise of standard studios and suites in bold designs. The hotel will feature the famous Radisson RED food and beverage concepts and social scenes, such as the ‘all day dining’ OUIBar + KTCHN. Following the footsteps of its sister hotel in Cape Town, voted the best rooftop bar in the city, Radisson RED Johannesburg Rosebank will also boast a trendy rooftop bar and terrace. This will also include a swimming pool and fitness room, giving guests various options to unwind, all while basking in the stunning Johannesburg skyline views.

Thinus Crafford, Developer and Oxford Parks’s representative, commented: “The hotel will be located in the first phase of Oxford Parks – a unique, holistic urban space designed to uplift and enhance the community and promote a sense of belonging. The Radisson RED will complete phase one of Oxford Parks, consisting of 4 commercial buildings, the Radisson RED hotel and ancillary retail on the ground floor of each of the commercial buildings. Oxford Parks offers you an experience where business, lifestyle and leisure are harmoniously integrated. We are proud to announce that tenants such as BPSA, the Life Healthcare Group, Thebe Investment Corporation, ARUP, Metier, Credo Wealth and Sony have decided to relocate their corporate offices to Oxford Parks. All buildings within Oxford Parks will be designed to meet a minimum 4-Star Green Star rating. In Oxford Parks, sustainable technology becomes a lifestyle and not just a passing trend. We are delighted and honored to welcome to Oxford Parks, both Radisson RED and the investor, RDC Properties Limited, and are confident that soon both will experience and be part of this uniquely compelling urban space”.

Introducing its distinct and quirky meetings and events space to the city, the hotel will offer six event studios, a conference room and a large meeting room – each with high-speed Wi-Fi, the latest audio-visual technology and creative spaces to drive inspiration.