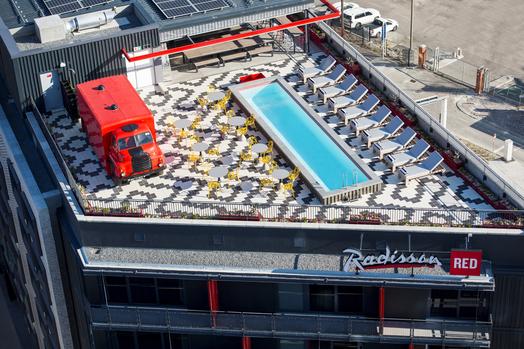 The Radisson RED Cape Town has opened its doors in the V&A Waterfront’s newly revamped Silo District, making it the first Radisson RED branded property on the African continent.

Radisson RED’s bold, inspirational design and philosophy is set to shake-up South Africa’s staid and traditional hotel scene. Mark Willis, Carlson Rezidor Hotel Group’s Senior Area Vice President for the Middle East, Turkey and Africa, says that Radisson RED is a completely new and different hotel concept. It is bold and alive, and provides an experience like no other.

The hotel will offer: free, unlimited, high-speed WiFi that can be accessed throughout the building; a fully equipped gym; four events and games studios equipped with the latest technology; a rooftop grill, bar and pool; and 252 studios. Further to this, the hotel is pet friendly and prides itself on only stocking local beer.

According to the property group,Radisson RED guests are not defined by a certain age – they are united by an appreciation for unique but intelligent design, energetic social spaces, technology that makes their lives easier, and a customisable, personal experience.”

“Cape Town is the perfect city to showcase our first Radisson RED in Africa. We are confident it will spearhead a snowball effect on expansion for the brand in key territories across the continent. For the City of Cape Town, developments such as this represent so much more,” says Dale Simpson, the hotel’s General Manager (also known as the ‘Curator’), who is in charge of bringing the brand’s bold experience to life by leading a staff of creative, expressive and service-driven people.

He says that the opening of Africa’s very first Radisson RED will not only continue to drive local and international guests to the city, but will also serve to boost economic development through the creation of various job opportunities for locals in the newly revamped, trendy district. “The recent restoration of the V&A Waterfront’s Silo District has created a major opportunity for Cape Town’s tourism sector, and we are thrilled to be an integral part of that. Furthermore, the opening of our new hotel will serve as a hub for local job creation and globally relevant skills development – especially as we focus on employing unique staff with more than just traditional qualifications and prior hospitality experience. This will open up the playing field to a much wider range of talented candidates.”