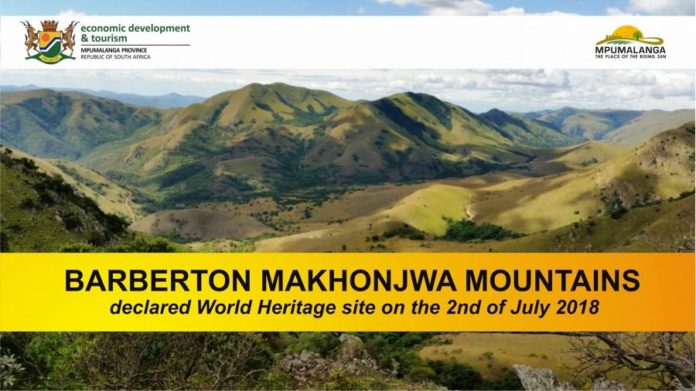 The Makhonjwa Mountains, known as the Barberton Greenstone Belt in Mpumalanga, have been declared as South Africa’s 10th World Heritage Site.

On Monday the Portfolio Committee on Tourism in Parliament “welcomed” the development.

Chairperson of the Committee Lusizo Sharon Makhubele-Mashele said: “The Committee is ecstatic as the Makhonjwa Mountain range in Mpumalanga has met the four criteria set for natural sites.”

The site contains superlative natural phenomena or areas of exceptional natural beauty, has outstanding examples that represent the major stages of earth’s history, is an outstanding example of significant on-going ecological and biological processes in the evolution and development of land and sea communities of plants and animals and contains the most important natural habitats for conservation of biological diversity.

The heritage site comprises 40% of the Barberton Greenstone Belt, one of the world’s oldest geological structures. It represents the best-preserved succession of volcanic and sedimentary rock dating back 3.6 to 3.25 billion years when the first continents were starting to form on the primitive earth. It features meteor-impact fallback breccias resulting from the impact of meteorites formed just after the Great Bombardment (4.6 to 3.8 billion years ago).

“We live in a country that is resplendent in natural beauty be it the mountains, beaches or forests which makes South Africa attractive to overseas tourists and to locals alike,” said Makhubele-Mashele.

“We call on South African Tourism to market all the heritage sites in South Africa as tourism is one cornerstone of developing the economy and creating jobs for local people.”