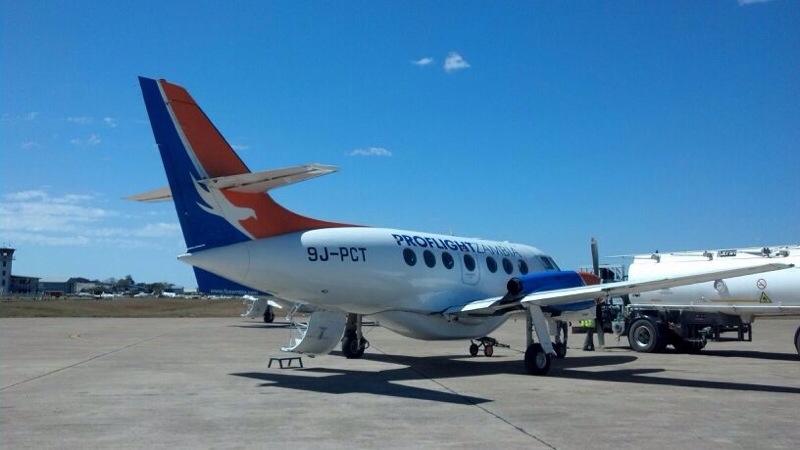 Proflight Zambia has launched its new international route from Lusaka to Harare which aims to boost trade, passenger movements and connectivity between the two capitals.

The introduction of the new flight to Harare from Lusaka makes Proflight Zambia the only airline servicing the route with early morning flights 4 times a week.

Allowance Sango Director Aviation and Rail Transport in the Ministry of Transport and Infrastructural Development in Zimbabwe said during the launch in Harare: “This is a wonderful development in the aviation industry and the destination connectivity will benefit travellers from both countries.”

Sango added: “The coming of Proflight in our skies reaffirms the commitment between Zambia and Zimbabwe in opening up Africa’s airspace. This is a move of accelerating Africa’s agenda in opening up Africa’s skies.” The new route that links Harare and Lusaka four times a week is one such conduit that will strengthen trade relations between the two countries.

Air transport provides important economic contributions to economies. Through its impact on industries, it facilitates economic and development growth. Proflight continues to help countries participate in the global market by increasing access to main markets and allowing the globalisation of production. Proflight’s Harare route will help build a solid relationship between Zambians and Zimbabweans. Zambian and Zimbabwean travellers will benefit from Proflight’s early scheduled flights which will increase efficiency and reduce the cost of travel.

The morning schedule on the route enables travellers to connect onwards to Proflight’s onward domestic and international flights. The route will be very popular to business travellers from both countries, and adds a third international route for the airline, which also flies from Lusaka to Durban in South Africa and Lilongwe in Malawi, in addition to linking all the main provincial centres within Zambia.

Travellers from Harare will be able to easily connect with Proflight domestic flights to Ndola, Solwezi and Mfuwe, and Internationally to Lilongwe Malawi. The neighbouring countries share business, tourism and family links and the airline is very confident that the morning service will complement existing afternoon services on the route. Lusaka is about 395km flying distance from Harare and the journey takes only 70 minutes by air, compared with a journey by road of more than seven hours. The airline will fly four times a week, on Mondays, Tuesdays, Thursdays and Saturdays, with flight P0031 leaving Harare at 08h25 and arriving in Lusaka at 09h35. P0030 leaves Lusaka at 06:45hrs and arrives in Harare at 07h55.

Jeanette Briedenhann
Jeanette Phillips joined the team in 2016. She developed a passion and love for all things-travel related in her role as travel journalist, a position she held for over seven years. A brief exodus into the corporate marketing sphere proved that there is no better industry than the travel industry. Research and writing are two of Jeanette’s greatest passions, but she is always open to new challenges and different ways of doing things.
Previous articleHeading to Dubai? Emirates introduces exceptional summer experiences
Next articleaha Kopanong completes conference refurbishment