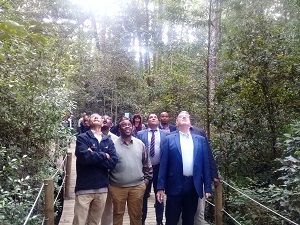 The Minister of Tourism, Derek Hanekom visited the Tsitsikamma Gateway Project and then the Tsitsikamma ‘Big Tree’ as part of the launch of Tourism month in the Eastern Cape on the 16th August 2018. His visit was to assess progress of the biggest tourism infrastructure in the Eastern Cape- the Tsitsikamma Gateway Project funded by the Department of Tourism and SANParks. The R14,4 million project has 2 phases. The first phase took off after a Basic Environmental Assessment and an Environmental Authorisation gave the thumbs up for bulk services to be installed. The services which include water, electricity and sewer already provide the Storms River Village (staff houses) via a pipeline which runs under the N2.

The second phase of the project is already underway to create a precinct with a coffee shop and curo shop. Some 16 locals are involved in its construction with a contractor from the Eastern Cape Province (Simunye Developers).

‘The Tsitsikamma section of the Garden Route National Park (GRNP) will look different in the next two years. SANParks is changing the way people experience nature’ says Park Manager of the GRNP, Paddy Gordon. Minister Hanekom was impressed with the progress of the Big Tree project and emphasized the significance of technological advancement in tourism development.

The ‘Big Tree’ is an Outeniqua Yellowwood in Tsitsikamma which is estimated to be about 1000 years old. It is close to 40 meters high and about 9 meters in diameter. The Garden Route National Park is home to Yellowwood trees that have been around for more than 8 centuries. The Outeniqua yellowwood tree in Woodville (Wilderness section of the Park) is a huge, tall tree that is about 31 meters. It is believed to be over 800 years old. The 800- year old Diepwalle Big tree survived the unsustainable methods of harvesting by the woodcutters post the 1939 era.