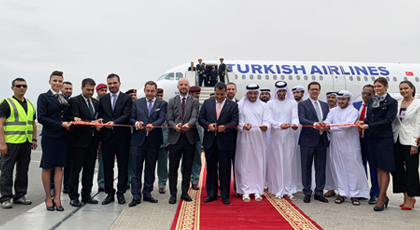 Turkish Airlines added Sharjah, its third destination in the UAE

Flying to more countries than any other airline in the world, Turkish Airlines consistently continues to enhance its flight network. The national flag carrier now started scheduled flights to Sharjah, one of the favorite tourism centers of United Arab Emirates. Sharjah became the 307th destination that added to the extensive flight network of the global brand.

As Turkish Airlines’ third flight destination in the UAE after Abu Dhabi and Dubai, flights to Sharjah will be conducted on the Istanbul-Sharjah-Istanbul route.

During the launch of the inaugural flight, Turkish Airlines Chief Marketing Officer (CMO) Ahmet Olmuştur stated the following; “With Istanbul Airport, a new era has begun for Turkish aviation and tourism sectors. With having such a monumental facility as our home base, now we have an unmatched advantage to further accelerate our network expansion performance. As part of this performance, today we are highly pleased to add Sharjah as our third destination in the United Arab Emirates after Abu Dhabi and Dubai to ever-expanding flight network of Turkish Airlines.”

Selected as the Cultural Capital of Arab World in 1998, Sharjah is a coastal destination away from the desert heat and it is the third biggest and third most populous emirate of United Arab Emirates. Modern but old, crowded but peaceful, Sharjah’ rich history, culture and economy attracts the passengers traveling here.

All times are in LMT.

Jeanette Briedenhann
Jeanette Phillips joined the team in 2016. She developed a passion and love for all things-travel related in her role as travel journalist, a position she held for over seven years. A brief exodus into the corporate marketing sphere proved that there is no better industry than the travel industry. Research and writing are two of Jeanette’s greatest passions, but she is always open to new challenges and different ways of doing things.
Previous articleEmirates completes installation of Expo 2020 Dubai livery on 40 aircraft
Next articleJKIA takeover rejected

Air Seychelles has today announced that the airline will operate passenger services from Johannesburg to Maldives between 4 December, 2020 and 9...
Read more
Tourism Marketing

The authorities in Seychelles have given permission for travellers from South Africa to enter Seychelles as of Monday 19th October 2020.
Read more
Aviation