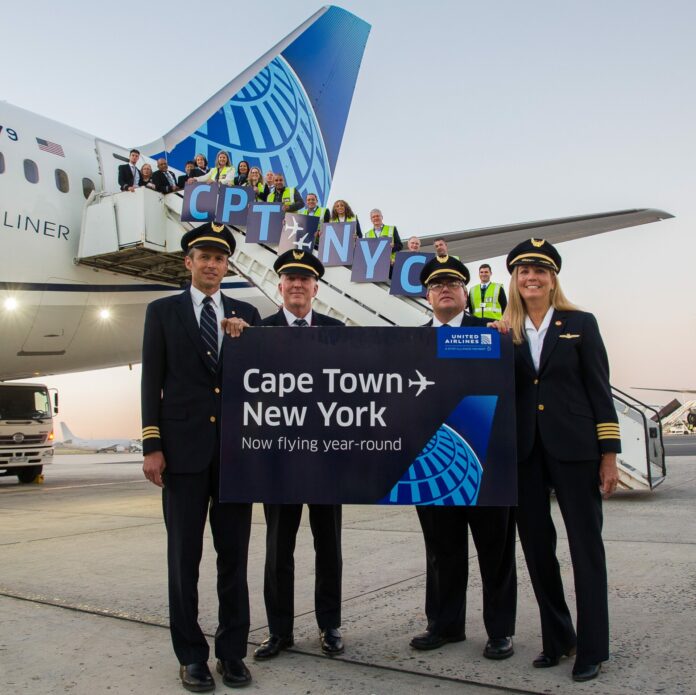 United Airlines has commenced its year-round service of three weekly flights between Cape Town International Airport and its New York/Newark hub, marking the route’s expansion from a summer seasonal operation.

“In addition to putting the U.S. within easy reach of the Western Cape, our service makes it easy for U.S. travellers to reach Cape Town, consistently ranked among the world’s top travel destinations,” said Bob Schumacher, United Regional Director Sales. “The expansion of this service offers our business and leisure customers in South Africa and in neighbouring markets, greater choice and significantly reduced travel times.”

“The expansion of United’s New York/Newark – Cape Town operation to a year-round, three times a week service will enable renewed and expanded economic opportunities for Cape Town and the Western Cape.  New York is the largest regional economy in the U.S, and a global hub much like Cape Town, making the cities ideal partners. We cannot discount how valuable increased connectivity is, and we would like to thank United Airlines for its continued commitment to our destination,” said Wrenelle Stander, Wesgro CEO and Official Spokesperson for Cape Town Air Access.

“Welcome back United Airlines. We are pleased to welcome the United team and passengers back to Cape Town International Airport earlier than originally scheduled and we look forward to the year-round service,” said Mark MacLean ACSA’s Regional General Manager Cape Town International Airport Cluster. “Travellers continue to be offered a growing number of international destinations from Cape Town and we are particularly pleased that more airlines are choosing to operate throughout the year.”

“The U.S. government is delighted about the start of United Airlines’ year-round, direct flight between Cape Town and Newark, which reflects the strong and longstanding trade, commercial and people-to-people ties between the United States and South Africa,” said U.S. Acting Consul-General in Cape Town, Emily Shaffer. “This flight creates economic opportunities, reunites families and friends, facilitates educational exchanges and further strengthens our robust relationship and partnership with the Western Cape.”

“The expansion of the current service by United Airlines, from seasonal flights to an all-year-round service which includes three flights per week direct from New York/Newark-Cape Town, is more great news for the Western Cape,” said Mireille Wenger, Western Cape Minister of Finance and Economic Opportunities. “There is clearly a surge in demand for flights to Cape Town. This points to signs of recovery and rebound in the tourism and hospitality sector. One of my priorities is to clear obstacles so that we can increase connections to the Western Cape, which will bring a host of positive contributions to the economy and job creation. The Western Cape government is a proud partner of the Air Access programme and we thank them for their hard work in increasing connectivity to the province.  At the end of the day, more flights mean more tourists, and more tourists mean more jobs in the Western Cape.”

United first launched flights from Cape Town in December 2019, and it quickly became one of the airline’s flagship international routes. The airline later built upon this success in Africa with the launch of flights between Johannesburg and New York/Newark in June 2021, new service between Accra and Washington D.C. in May 2021 and between Lagos and Washington D.C. in November 2021.

United has applied to the U.S. Department of Transportation (DOT) for authority to operate year-round service between Washington D.C. and Cape Town this coming November. The application is pending review under the DOT’s route proceeding allocation.

United began serving South Africa in 2019. In addition to the three-times weekly nonstop service from Cape Town to New York/Newark, United offers customers from South Africa non-stop flights between Johannesburg and New York/Newark. Flights are conveniently timed to connect at United’s New York/Newark hub with an extensive network of services to destinations throughout the Americas. United customers in South Africa can book flights by visiting united.com or contacting the United Reservations on 0214268058 or their travel agent.

Located just 14 miles from Manhattan, Newark Liberty International Airport offers the fastest surface transfer journeys to many parts of the city, including the AirTrain service to New York Penn Station in midtown Manhattan, with a journey time of less than 30 minutes.
This summer, United will operate over 400 daily flights to 148 destinations in 38 countries from Newark. United’s Newark hub is its largest transatlantic gateway, with service added to five new European destinations this summer.