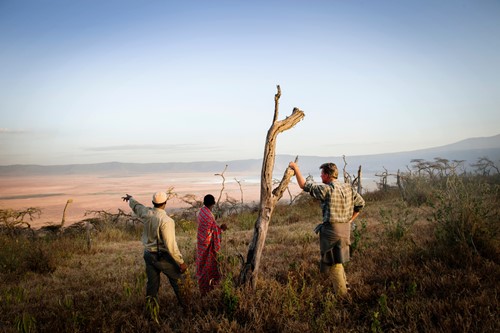 Nomad Tanzania has introduced a walk between Entamanu Ngorongoro and Serengeti Safari Camp as an alternative to a game drive transfer between the two camps.

The walk will leave Entamanu Ngorongoro early in the morning, and take a downhill meander off the Crater rim towards the southern edge of the Serengeti plains, with views out over Olduvai Gorge and the Gol Mountains beyond as the sun lights the horizon. By getting far off the beaten track, our guests will have the chance to really experience both the traditional Maasai culture and the wildlife that calls the Ngorongoro highlands home.

What you need to know…
• Led by experienced Nomad and Maasai guides, and by an armed ranger.
• Costs no more than a standard game drive transfer between the two camps.
• Offers the opportunity to visit the Olduvai Gorge museum and Shifting Sands.
• Available between mid-December and March when Serengeti Safari Camp is in the Ndutu area.
• Depending on group fitness and how long they’d like to walk for, the walk could take anything from 1hr to 5hrs.
• Ends with a surprise cook-out brunch near Olduvai Gorge where they’ll meet their vehicle, explore the gorge and Shifting Sands and then drive the last bit to camp, arriving in Serengeti Safari Camp in the early afternoon.