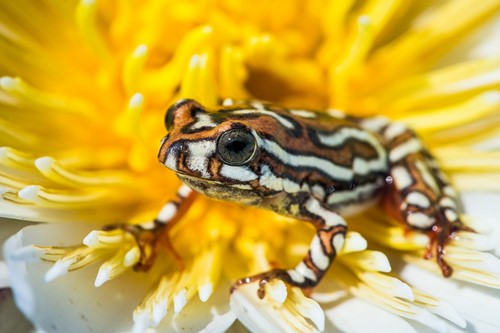 Wilderness Safaris Botswana recently launched a biodiversity monitoring programme in its Linyanti and Vumbura concessions, with the aim of helping to improve scientific knowledge and management of the area’s biodiversity. The initiative, which began in June this year, is an example of the company’s long-held commitment to using authentic ecotourism to realise its vision of conserving and restoring Africa’s wilderness and wildlife.

The first sample focused on selected invertebrate groups, small mammals, amphibians, reptiles and fish, using pitfall traps, nets and light traps to catch the study subjects. Having already analysed more than half of the data, the environmental team has processed 888 observations of 388 species. Among the plants and animals recorded were the tiny, exquisitely coloured Pinhey’s sprite and the bladderwort – a carnivorous plant that floats on water.

Guests at Vumbura Plains, King’s Pool and DumaTau camps were given the opportunity to visit and interact with available researchers. In addition, the results were uploaded and regularly updated on iNaturalist.

“The second sample will be taken from December this year to January 2020. Based on the final outcomes, we are looking to expand monitoring to other concessions as a research project, while continuing to publish the species inventory and other records. To further the project, our dedicated Sustainability Fund has also sponsored the setup of hydrological monitoring sites at Little Vumbura, King’s Pool and Savuti camps, and the installation of a long-term data logging system for later in the year”, says Rob Taylor, Wilderness Safaris Botswana Conservation Ecologist.