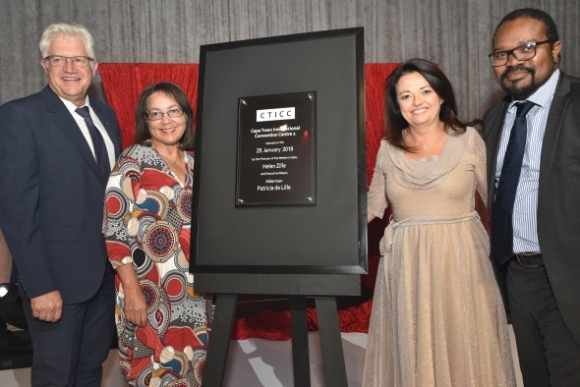 The new facility is set to strengthen Cape Town’s reputation as a global business events destination and marks significant progress in the CTICC’s strategy of becoming one of the top ten long-haul convention centres in the world.

Construction of CTICC 2 commenced in 2014. The facility is a collaborative project by the centre and its shareholders – the City of Cape Town, Western Cape Government and SunWest International.

“What are the benefits of this extra space? Essentially, two things: greater capacity and greater flexibility. We can now host very large events, such as the upcoming 15 000-delegate World Ophthalmology Congress, across the entire complex. Cape Town would never have won this bid, if it wasn’t for the CTICC’s expansion. And we can host multiple large events across both venues simultaneously, which we couldn’t do before. Put simply, we can now welcome more events and more people in more ways,” explained Ellingson.

Ever since the CTICC opened in 2003, expansion was on the cards as the centre’s growth exceeded expectations. High occupancy and lack of capacity prompted the company’s board to search for expansion sites.

“The CTICC generated over 16 million visitor days, by local and international delegates attending the nearly 7 000 events the centre has hosted since 2003. This is supported by an equally powerful impact on job creation. Through its operations the centre sustained a total of 107 000 jobs directly in the Western Cape and nationally since opening. The CTICC has made a cumulative economic contribution to national GDP of R36.3 billion and added R32 billion to the Western Cape economy,” De Lille explained.

The City of Cape Town which holds 71.4% of the shares in the CTICC, invested R550 million in the expansion project which acted as catalyst for the continued regeneration of the inner city. Western Cape Premier Helen Zille said the convention centre is a strategic asset of the local and provincial governments.

The provincial government gave R162 million in funding for the project. Zille confirmed that the expert completion of CTICC 2 is a continuation of the overall support the centre has received from all spheres of government. “The CTICC has far outperformed original expectation becoming a profit centre in its own right. The CTICC’s continued profitability shows that government can facilitate entrepreneurship and that public-private partnerships can flourish in South Africa,” said Zille.

The CTICC contributed R193 million to the expansion project. “CTICC 2’s construction sustained 1 337 job opportunities of which 75.5% benefited black construction workers and specialists and 7.2% of the manpower on site was female. There were also 11 engineering students working on the project and 10 were black women who are building their careers in the industry,” Ellingson reported.

The centre located opposite and due east of the original convention centre boasts an environmentally sustainable design, high-tech venue control systems, high-calibre IT infrastructure, free public Wi-Fi, three production kitchens to cater for every type of event, and a service tunnel under Heerengracht avenue connecting CTICC 2 with CTICC 1.

The centre will now be further integrated with CTICC 1 to ensure seamless event operations. “Phase 2 of the CTICC 2 project is well underway. In the next few months, we will be able to start construction of the skybridge linking the two buildings across Heerengracht,” Ellingson confirmed.

Prior to the official opening CTICC 2 had already hosted several “event firsts” to showcase the centre’s capabilities welcoming close to 50 000 delegates.

The new centre opens with exciting upcoming events in the pipeline. The CTICC has a total of 133 bookings for events, with 58 international conferences secured and 75 national events contracted until December 2023. Thirteen of these events will take place concurrently in both buildings and 20 events have already been contracted to take place in CTICC 2.