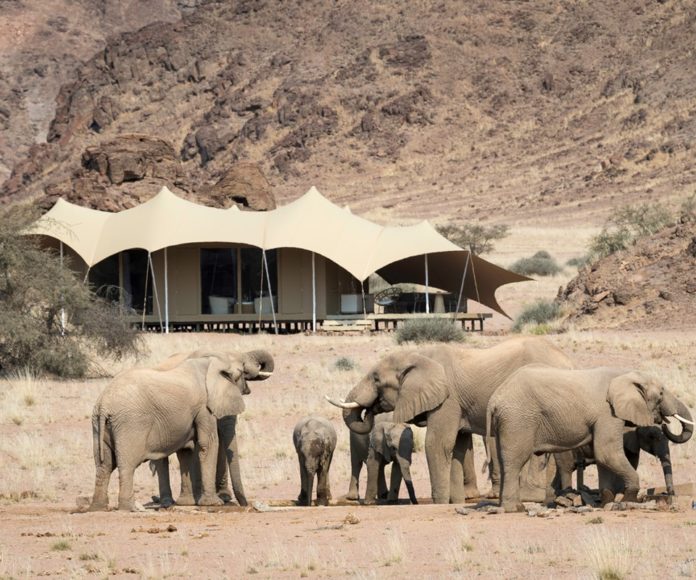 Wilderness Safaris once again hosted the principal researchers of the Desert Elephant Conservation study, Laura Brown and Rob Ramey, at Hoanib Skeleton Coast Camp in Namibia, where they spent six weeks during October and November 2017 researching and monitoring Hoanib’s desert-adapted elephant population in an effort to promote its long-term conservation.

This long-term research initiative observes the dynamics of the desert elephant population related to three sub-populations of elephants as well as their social organisation and genetics. All elephants are identified based on images of their ears, tusks and tails which enables the researchers to keep track of the population numbers.

Both with PhDs from Cornell University, US, Laura and Rob have been studying the elephant populations of the Uniab, Hoarusib and Hoanib since 2005. Through annual surveys, they have created a complete inventory of the desert-adapted elephant population with photographic identifications of each individual.

“We are proud to see the Hoanib Research Centre become a base for many important and groundbreaking research studies here in the arid desert. The Desert Elephant Conservation project will ultimately help add to our knowledge of Namibia’s unique desert elephant population and be used in the country’s ongoing conservation efforts to protect it”, said Alexandra Margull, Wilderness Safaris Namibia MD.

The Hoanib Research Centre is already known for being the base for Dr Phillip Stander’s Desert Lion Project, as well as that of Emsie Vervey’s studies on brown hyaena. Guests staying at the Hoanib Skeleton Coast Camp can look forward to presentations by the conservation researchers available at the time.