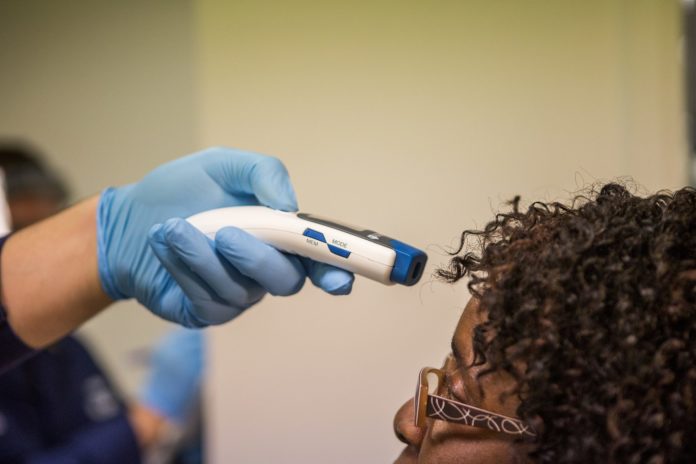 The Federal Airports Authority of Nigeria (FAAN) has intensified screening of arriving and departing passengers at the Murtala Muhammed International Airport, Lagos with the use of thermal and infrared scanning equipment in light of the current outbreak of Ebola in the DRC.

According to FAAN screenings never stopped at any of the airports to detect any communicable diseases including Ebola since its first outbreak in 2014. However, it said that it has decided to increase the degree of the screening after the outbreak of the disease again in the Democratic Republic of Congo.

No confirmed cases have been reported in Nigeria and Regional Manager of FAAN, Sani Mahmud, also said members of the public have no reason to panic adding that adequate measures have been put in place.

“We are at the alert phase of the outbreak. Since the first outbreak in 2014, we never stopped checking our passengers. They were always undergoing screening,” he said.

Alongside the intensified screening of passengers, the airport has also upgraded its focus on hygiene.

Deputy General Manager and Head of Aviation Medical Clinics for FAAN, Doctor Adamu Adamu added that officials are looking for a rise in temperatures in travellers and travel history. Sanitation in general at the airport public areas have also been upgraded with the installation of sanitizers to ensure that passengers that come into Nigeria have facilities to clean up their hands and also washing facilities at the toilet. Health messaging has also been put on display throughout the airport.

This week health officials from the World Health Organisation have vaccinated more than 420 eligible people in rings around the four cases of Ebola which have been confirmed in Mbandaka. In addition, the vaccine has been offered to health care workers in the area.

“It is possible that there will be new cases confirmed of Ebola in the city,” said Ana Maria Henao-Restrepo from the Initiative for Vaccine Research at WHO. “However, it is reassuring to witness that the affected families and communities are accepting our teams and that they have been able to implement ring vaccination.”

Vaccination has begun in other areas of Equateur Province with confirmed cases of Ebola. On 28 May, ring vaccination began in Bikoro, which is 150 kilometres from the provincial capital. Later this week, vaccinators from Guinea and the Democratic Republic of the Congo are expected to start ring vaccination in Iboko health zone, which is the most remote of the three areas reporting confirmed cases.