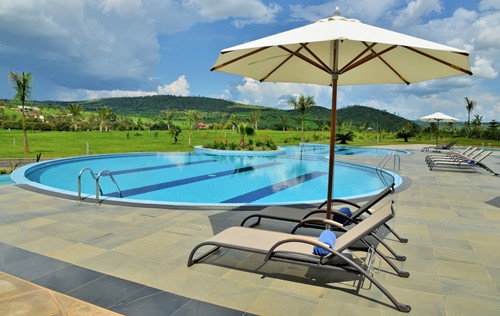 Mantis has acquired the management contract for EPIC Hotel and Suites in Rwanda. The contract has been signed by parties from the Eastern Province Investments Corporation LTD (EPIC LTD) and Mantis Collection, and operations will be taken over by Mantis effective immediately. Dino Urbani will continue as general manager of EPIC Hotel and Suites. EPIC is a luxurious 77-bedroom hotel in the Eastern Province District of Nyagatare, Rwanda. The hotel is situated close to the Akagera National Park’s Northern Gate and the Ugandan border.

EPIC Hotel and Suites was officially opened by His Excellency Paul Kagame; President of Rwanda on the 1st of March 2018 and has been offering business and leisure travellers luxurious accommodation, conferencing and banqueting. The hotel features a bar and restaurant, a business centre, and 2 swimming pools. This destination is also family-friendly with features such a kiddies’ pool, entertainment centre, and a floodlight basketball court and tennis court.

Mantis began its development journey in Rwanda over 10 years ago while consulting on the Wildlife Management plan for Akagera National Park in 2007. Mantis has entrenched itself in the tourism sector of Rwanda and is invested in enhancing the country’s lesser-known attractions while complimenting the Gorilla Circuit. Mantis is currently managing the upgrade at Akagera Game Lodge in Akagera National Park to align it with the Mantis standard and has plans to expand its footprint in Rwanda. “We are proud to be associated with Rwanda, and partnering with establishments such as EPIC Hotel and Suites that contribute to the sustainable economic development of the communities of the Eastern Province of Rwanda,” said Adrian Gardiner, Chairman of Mantis.