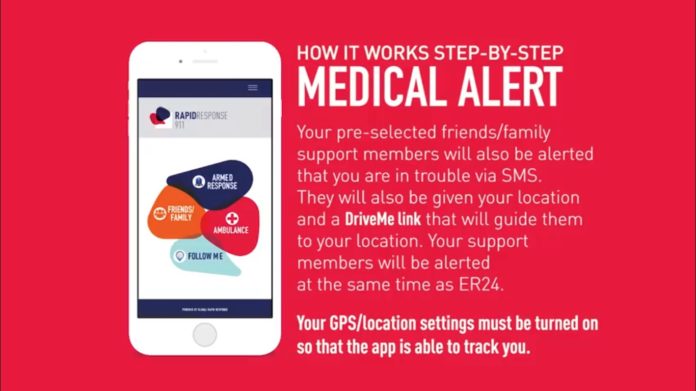 A partnership between 911 Rapid Response, Nhongo Safaris and the Tourism Business Council of South Africa (TBCSA) has seen the launch of a new app, aiding in the safety and security of visitors to South Africa.

The app which is available in the Google and Apple App stores provide users with the option of three alerts – calling for an ambulance, calling for both an ambulance and a tactical unit, while the third issues a notification to fellow travellers.

Once the user selects the alert they require, their GPS location is issued to 911 Rapid Response’s dispatch office.

a map indicating where the nearest tourism support services are, such as embassies, police stations, hospitals, fire and petrol stations.
the ability to report an incident to the Tourism Safety Initiative (TSI) website, to which the app is linked.
a ‘follow me’ button. Subject to approval by the traveller, this feature allows the response members to follow the traveller’s route by the minute.
Additionally, a Near Field Communicator (NFC) can be fitted to the traveller’s vehicle. Should travellers suspect they are being followed, they can tap the NFC to alert the call centre. 911 Rapid Response will immediately dispatch a security vehicle to accompany the traveller.

We are proud to announce our partnership between Nhongo Safaris and 911 Rapid Response on the release of the "911 Rapid Response" App that is currently available on the Apple IStore and Googles Android App Store. This app enables your mobile smartphone to be used by either International And Local visitors to South Africa as a mechanism of alerting us where you need somebody to help you in a crisis situation where you may need a Tactical Response Team (Ex Military, SAP and Special Ops), and Ambulance or even a helicopter evacuation due to a motor vehicle accident, or if you need it just to keep family members up to date of where you are, parameters can be set, and if you venture out of those parameters, a signal will be sent to family and friends who's details you have loaded into your smartphone. Nhongo Safaris together with 911 Rapid Response have been testing this technology over the last eight months, and are glad to announce that testing of the system in all types of conditions has gone of very well, so much so, that we have decided to release it to the market, so that people can download it, and experience the "piece of mind" that an app such as this gives you while you are out and about on the roads around South Africa. For more information on how the app works, please watch our video, or visit our website http://www.nhongosafaris.co.za/index.php/about-nhongo-safaris/911-rapid-response

Posted by Safaris Into Kruger on Sunday, 8 October 2017