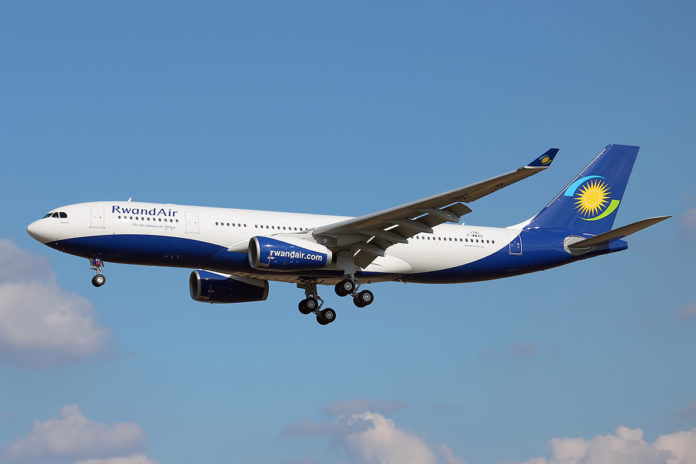 RwandAir has been granted an air operating license by the the United States government to launch scheduled services.

In a communiqué issued by the US department of Transportation on March 28, the US government acknowledged receipt of RwandAir’s application.

However, as per procedure, interested persons had only 21 days to file their objections to RwandAir requests.

“If no objections were filed, all further procedural steps would be deemed waived, and the Department would enter an order (subject to Presidential review under 49 U.S.C. §41307) which would make final the findings and conclusions of the Order,” said the Transport Department.

“No objections were received within the time period provided,” the communiqué, a copy published below reads in part.

Meanwhile, Brian Hedberg, the Director in the Office of International Aviation, who also signed this communiqué said; “We make final our findings and conclusions as stated in the Order and award to “RwandAir” Limited Liability Company the foreign air carrier permit with associated conditions attached to the order.”

The Transport department further says that unless this authorisation is disapproved by the President of the United States the order shall become effective on the 61st day after its submission for a review or upon the date of receipt of advice from the President or his designee and implementing regulations that he or she does not intend to disapprove the Department’s order under that section, whichever occurs earlier.

Commenting on the announcement, Patrick Maina Kamanga, MD Deans Travel Centre in Kenya said that should flights launch in August, RwandAir will beat Kenya Airways in the race to become the third African carrier to launch flights to the United States, resulting in competition for the latter in the East African market.

Currently only South African Airways and Ethiopian Airlines fly into the US.