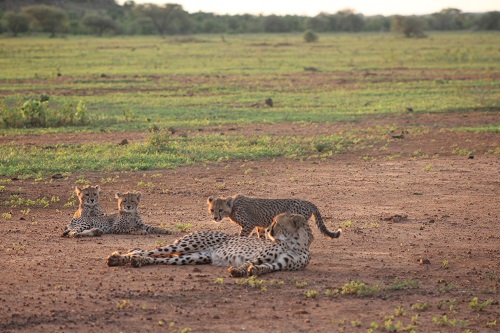 Mapungubwe National Park and World Heritage Site’s cheetah population is picking up, this after the birth of three new cubs recently. This success story is not only for Mapungubwe but the country at large, since the cheetah is classified as a threatened mammal.

“The Park is home to a sizeable cheetah population but their numbers decreased due to uncontrolled illegal hunting for their skin, even though they are seldom seen in the thick mopani bushveld in some areas of the Park. However, since late last year the animals have been spotted several times by rangers and tourists to the Park which makes it a great value-add to the tourist experience in the Park”, said Park Manager, Mr Conrad Strauss. This coalition, which is gaining popularity amongst the rangers and tourist, is dubbed “mom and the trio” and can be spotted on the western side of the Park. Cubs depend on their mom for survival so the “mom and the trio” are expected to be seen together for quite some time.

To spot this coalition and many other animals visit Mapungubwe National Park and World Heritage Site, situated just 70km west of Musina in Limpopo Province. Over and above the sightings, a visit to the majestic Mapungubwe Hill where the first African kingdom existed as well as the world class interpretation centre is always a marvel.

Jeanette Briedenhann
Jeanette Phillips joined the team in 2016. She developed a passion and love for all things-travel related in her role as travel journalist, a position she held for over seven years. A brief exodus into the corporate marketing sphere proved that there is no better industry than the travel industry. Research and writing are two of Jeanette’s greatest passions, but she is always open to new challenges and different ways of doing things.
Previous articleMicrosite launched to assist tourism trade in answering Cape drought questions
Next articleCongo Airways launches weekly Kinshasa-Johannesburg route