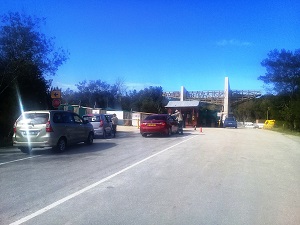 The entrance gate to the Tsitsikamma section of the Garden Route National Park is expected to be completed in Spring. This after hiccups in the project after the hired company for the gate could not complete it due to unforseen circumstances.

The main aim of the new gate is to introduce a streamlined structure and system for visitors entering the main gate. Noise levels around the site have remained normal and parking space has not been affected by the construction work since 2016. No heavy machinery is used and all work is on existing footprint. Once completed, visitors will enter and exit the Park more efficiently. There will be 4 lanes to enter the Park and 2 to exit.

A company was subcontracted to complete roofing. Roofing and paving is currently underway. Glass doors and windows were also added last month. Speaking confidently about the progress of the project, Bulelwa Msengi, Area Manager for the Tsitsikamma section of the Garden Route National Park (GRNP) says ‘we can certainly see the light now nearly at the end of the tunnel, the construction is progressing well and not affecting visitors entering or exiting the Park. We are confident the project will be completed by Spring.’

Measures in place to ensure easy access during peak season in December includes temporary entrance lanes as well as 2- 3 roving SANParks officials to assist with paperwork from the entrance gate.

The Tsitsikamma section of the Park remains the most popular coastal National Park in South Africa and reported an increase of 12% in the number of visitors to the Park for the Financial Year 2017/2018. ‘Visitors are drawn to the Park’s many activities. For starters the Park has 12 Green Flag status trails in close proximity making it the only Park to have this in South Africa. The suspension bridge, water activities and the beauty of the National Park are some of the reasons for the yearly increase.’

The Tsitsikamma Section’s project began in 2016 as part of a +R19 million project to upgrade to infrastructure in the Storms River Rest Camp and includes the development around the Big Tree. R19 million was granted by the Expanded Public Infrastructure Programme (EPIP) and National Department of Tourism.

More about the Park….

Following the First World Conference on National Parks held in 1962 in Seattle, United States of America, Tsitsikamma National Park was declared in 1964, exactly 54 years ago to protect ‘coastal forest vegetation and marine world’.

The park covers an 80 kilometers (50 miles) long stretch of coastline. Nature’s Valley is at the western end of the Park, and the main accommodation is at Storms River Mouth. GPS Coordinates: 34°01′S23°53

According to the Park’s State of Knowledge report (2005), the Tsitsikamma mountains are 900- 1600 meters. The most common species of trees are milkwood, real yellowood, stinkwood, Cape blackwood, forest elder, white pear and candlewood, and gigantic Outeniqua Yellowoods.

Mammals found in the Park include caracal, blue duiker, grysbok, bushpigs, the Cape clawless Otter. They come out and night to hunt for food.

Boilerplate: This week the Park commemorated the work undertaken by marine rangers which includes boat and foot patrols, assisting with research and monitoring Africa’s oldest Marine Protected Area (MPA), removal of invasive alien plants in terrestrial areas and buffer areas of the Park and many other roles played by rangers from the Park.

Tsitsikamma means ‘place of much clear water’ in the Khoe-khoe language.