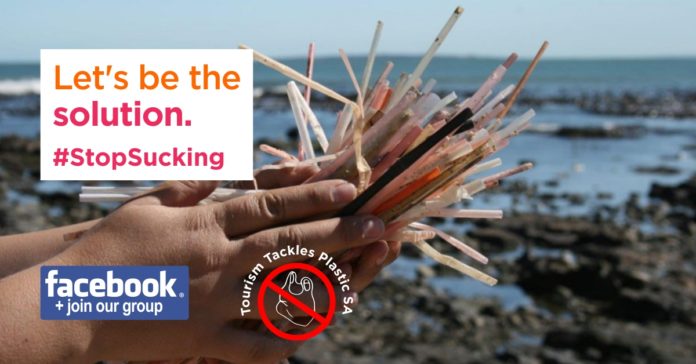 If you’ve had the last straw where straws and plastic are concerned, then join the Tourism Tackles Plastic SA group on Facebook to be apart of the community driving the movement against the overconsumption of plastic.

Moderated by the travel marketing team of Big Ambitions, the group aims to drive the conversation on awareness & connect those in tourism to various initiatives, campaigns and companies/individuals already pushing for less single-use plastic products in South Africa.

In an article published by the World Travel and Tourism Council on Medium.com the staggering levels of marine pollution is cause for very real concern and requires concerted efforts from every person on this planet. An estimated 8 million tonnes of plastic waste ends up in the ocean every year and every square kilometre of ocean holds an average of 13,000 pieces of plastic litter according to the Plastics Oceans Foundation and the United Nations. Plastics account for a sizeable portion of marine waste, and that has to change.

Plastics have both a direct and indirect effect on the planet. Plastics directly entering the oceans account for a massive percentage of marine pollution, and plastics also play a role in climate change, warming the world’s oceans. Travel & Tourism and the world’s oceans are inextricably intertwined. As much as 80% of tourism relates to the coastal areas, and the state of the world’s oceans can no longer handle the amount of plastics pollution entering the water each day. When tourism is concentrated in areas without effective waste management systems, trash and plastics invariably end up contaminating forests, rivers, and oceans. Litterbase visually maps where marine litter concentrates, and the magnitude of the issue is staggering. According to the United States Institute of Peace, “Once essentially excluded from the tourism industry, the developing world has now become its major growth area. Tourism is a key foreign exchange earner for 83 percent of developing countries,” and according to study from the University of Maryland “more than 50 million people from industrialised nations travel to developing countries each year.”

Here are some ways to minimize your plastic usage when you travel:

Bring your own water bottle.
Buy a portable water bottle and then invest in travel-sized water purification systems. Options include: decontamination tablets, sterilizing through UV light, and filtering straws. Research the differences in water purification options and select the one that fits your travel style. Buying and disposing of bottled drinks accounts for a huge portion of plastic consumption when travelling. Disrupting this habit makes a powerful statement about your commitment to minimising your use of plastics.

Carry your own collapsible tote.
Just as grocery stores are pushing for shoppers towards reusable bags, you can carry a tiny tote in your purse and use it when buying souvenirs. Many of these totes fold into themselves, making it compact way to eliminate the need for destructive plastic shopping bags — which you likely don’t need anyway once you’re back at the hotel packing your suitcase!

Refuse small shampoo bottles from hotels.
Invest in quality reusable toiletry containers and refuse the single-use shampoo and soaps provided by the hotel. Since it’s difficult to avoid using plastics altogether, it’s important to assess the amount of plastic per use. Using your own containers is an effective way to ensure you’re limiting the amount of plastics you consume on vacation.

Recycle when possible.
Look for opportunities to throw recyclables in designated bins, or ask if your hotel has a recycling programme. Often, even if the city or town does not offer recycling programmes, your guesthouse or hotel collects and recycles plastics. If that’s the case, toss plastics in your bag throughout the day and recycle once back at your accommodations.