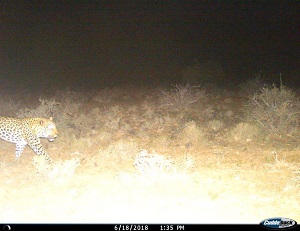 In a first for Karoo National Park – a leopard has been caught on a camera trap placed inside the Park!

The camera trap is part of a research project by Professor Jan Venter and Craig Packer: long-term camera trap monitoring and the landscape of fear in South Africa’s smaller national parks.

Park Manager, Nico van der Walt, says he was surprised by the photographic evidence from 18 June, as there had never before been any evidence of the presence of leopards in the Park. He says he suspects the animal must have entered the Park from elsewhere. Further information about the whereabouts of the leopard since are unknown.

Leopards were known to roam the Nuweveld mountains surrounding the Park decades ago, although they were incorrectly referred to as tigers. Abraham de Klerk, on whose farm, Hooyvlakte, Beaufort West was built on, apparently had nine sightings of “tigers” by 1804.

It’s unknown when the last leopard was seen in the Nuweveld mountains, but about 25 years ago a motorist allegedly reported a sighting along the N1, north-east of Beaufort West.

Van der Walt says leopards have big home ranges which vary from region to region, and it will be interesting to know what’s become of this one. He has requested that should a member of the public spot it, to report its whereabouts to the Park.